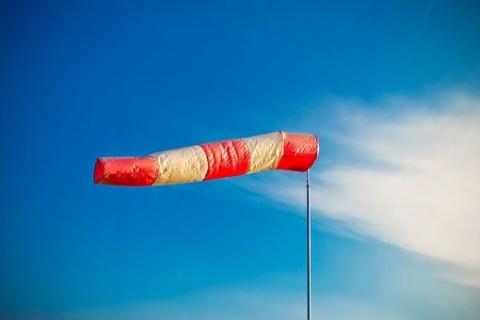 For example: A vessel is located in a shelter position, but a sudden change in wind direction is exposing the vessel for unfavorable conditions; or a team of technicians are working on a high construction, and a rapid wind increase is unexpected ending the working conditions.

Models can often forecast sudden wind shifts, but the timing and exact wind speed are more difficult to predict.  Below we have listed some situations that can be associated with a sudden shift in wind.

The most notable situations with rapid changes in wind, are associated with heavy showers. This is due to the turbulent nature of showers and thunderstorms. The wind will often be gusty, and the strongest winds will typically only last for a shorter period.

In a warm air mass, typically from the south during summer, the winds will often be weak until a thunderstorm approaches or passes near your location and the wind may rapidly increase.
Especially in the case of supercell formations, squall lines or other larger thunderstorm formations, there will be significant wind shifts. Over a continent, this may also be a situation where tornados could form – over sea, waterspouts could also form and cause a rapid increase in wind and change of direction. However, waves will not rise significantly due to the short duration. You can read more about waterspouts here.

Showers in a cold air mass, will typically not generate as notable difference in the wind, as the generally flow typically is stronger and the showers often are light or moderate.
As showers and thunderstorms are one of the most difficult weather phenomena to forecast, the models will often perform poorly when it comes to timing and intensity of a wind shift in connection with showers.

The passage of a front often means a change in wind direction, and often also wind speed. A front is defined as the border between two different airmasses. The schoolbook example of a frontal system contains a warm front followed by a cold front, and then an occluded front near the associated low pressure. Simplified, the wind will veer after each passing front (turning clockwise on the Northern Hemisphere) and will be strongest when the cold front has passed.
The wind shifts in connection with front passages are often gradual and not as dramatic as in connection with thunderstorms. However, in some situations, there could be a great difference in wind speed and wind direction. This often requires a stationary or slow-moving front, but not always. The weather models are often quite good at predicting the wind in connection with fronts, but the timing could be off by 1-2 hours and the wind speed will often peak somewhat higher than predicted.

Below is an example of a front passage with a large difference in wind speed and wind direction, on either side of the front zone. In this case, the strongest winds are ahead of the front (front moving southwards) and improving conditions as the front is passing. However, there is also a line of showers just north of the front (in the central part of the North Sea where the wind is becoming N- and NE-ly), and in connection with these showers there is a risk of strong gusts.

Below is another example, when a cold front was passing Denmark from north. South of the front rather weak westerly winds, and north of the front increasing northerly winds. In this case, it is especially the shift in wind direction that is most significant.

When the centre of a low-pressure is passing over a location, wind shifts in both direction and change in wind speed are expected. However, the changes in wind speed and direction are rarely unexpected and windy conditions are common.
In situation with larger low-pressure areas and no clearly defined low-pressure center, minor but intense lows can develop and swirl around within the low-pressure area. In these situations, there will normally be weak winds in the main part of the area but as a minor low is developing the gradient near the low will gradually be stronger (in the area from the minor low and away from the low-pressure area). When the minor low will be approaching a given location, weak winds will first be present, but as the low will be passing over the location the wind will rapidly increase.
Although the forecast models are generally good at forecasting these lows, a minor change in the track can cause a large deviation at a given location due to the small area of the strongest wind field.

Below is an example of a minor, but intense, low that was passing the eastern part of the English Channel. South of the low, strong gale force winds occurred. As displayed from the observations from Cadzand, the Netherlands, the wind was rapidly increasing and had gusts of hurricane force!

There are also local wind phenomena that could cause sudden increasing winds. An example is the cold katabatic wind called Piteraq, that can cause rapidly increasing winds along the east coast of Greenland. Below is an observation from Ikermiit, located in the southeastern part of Greenland, January 1st.

You can find similar wind phenomena in for example France, as described in this article about the Mistral.

If you are sailing, there could also be significant wind shifts due to the geographic and topographic conditions. If a vessel is crossing Skagerrak in a strong N- or NW-ly flow, there will be significant weaker winds in the eastern part due to the lee affect from the Norwegian mountains. When reaching the western part of Skagerrak, the wind will increase as soon as there is no lee anymore. The exact location of the increasing winds depends on the exact wind direction.

When sailing in fjords, lakes or other areas with significant topography surrounding it, you will often experience shifting winds and from other wind directions than the general flow. The same effect is present in cities with high buildings – there you can often experience gusty and turbulent winds on a windy day.