Deprecated: Array and string offset access syntax with curly braces is deprecated in /var/www/ventomaritime.dk/public_html/vendor/typo3/phar-stream-wrapper/src/PharStreamWrapper.php on line 468
 [node: The Mistral wind – how, when and where!| Skip to main content 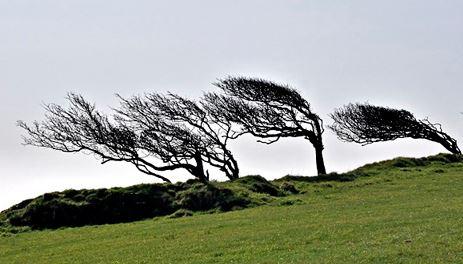 Summary
The Mistral is a strong north and northwesterly wind in Southern France.

Many of the trees in the area are forever bent in the direction of the prevailing wind!
Leaving the hustle and bustle of the Suez Canal or the Strait of Gibraltar, some calm weather days are to be expected in the Mediterranean Sea. However, experienced mariners will know of the surprise of the rough conditions that can occur south of France between Corsica/Sardinia to the east and Mallorca/Menorca to the west. For small vessels this could mean trouble!

It forms when a high pressure is located in the North Atlantic west of France and the Iberian Peninsula or in the Bay of Biscay while a low is located over or near the North Sea or the Baltic Sea. This constellation will often generate a lee-low south of the Alps in the Genoa Bay and a higher pressure north of the Alps – this low is called a Genoa low.
When this happens, the flow of air between the high and low pressure areas draws in a cold air mass from the north which accelerates through the valley between the foothills of the Alps and the Cevennes (the eastern edge of the Massif Central).
The conditions for a mistral are even more favorable when a cold front has crossed France from the northwest to the southeast to the Mediterranean Sea.

Another contributing factor to the strength of the mistral are the accumulation of cold air, whose density is greater, pouring down the mountains to the lower elevations. This is similar to the katabatic wind called the Piteraq that occurs at the southeast coast of Greenland near Tasiilaq or the Tehuantepecer in Central America – read more here in this article if you want to read more about the last-mentioned local wind.

The mistral wind blows offshore along the Mediterranean coast from northwestern Italy across the French coast to northeastern Spain, and is particularly strong and frequent in the lower Rhône Valley in south-eastern France. It blows a long way out into the Gulf of Lion in the northern Mediterranean Sea and can be felt to the east of the Balearic Islands, in Sardinia, and sometimes as far as the coast of Africa – and thus affecting the conditions on the busy shipping lane north of Algeria.
Often the Genoa low will move away from the Genoa Bay after some days and can then bring very windy and rainy conditions to other regions in the Mediterranean. If you want to learn more about the different kinds of lows, you can read this article.

The Mistral is most common and strongest in the winter and spring, and strongest in the transition between the two seasons, though it occurs in all seasons. Its strength is increased by the funneling effect of the Rhône Valley. It sometimes lasts only for one or two days, but frequently it lasts several days, and sometimes it lasts more than a week.

A Mistral event can last for a couple of days and up to a week and the funneled, strong winds can be felt several hundred nautical miles offshore.
It generates mean winds often exceeding 35 knots, but sometimes reaching hurricane force.
Although the fetch of the winds is relative short, significant wave heights of 4-7 meters can typically be observed. If you want to learn more about the relation of the strength, the duration and fetch of the winds and the height of the wind waves, then please read this article.
The large vessel in the global merchant fleet can easily handle these conditions, but for small vessels these conditions are to be avoided.

The Mistral causes an unusually sunny climate in the Provence and Languedoc area with 2700-2900 hours of sunshine a year due to the dry and clear air. When other regions of France have clouds and misty air, the South of France area is rarely affected, since the mistral quickly clears the sky.
In less than two hours, the cloud cover can change from overcast to a completely clear sky.
The visibility is often also extremely good due the drying effect of the Mistral, so that during and Mistral event it is possible to see mountains more than 150 kilometres away.

As summer visitors to the beach in the area learn, the summer mistral can quickly lower the sea surface temperature, as the wind pushes the warm surface water out to sea and causes upwelling of colder water from greater depths.