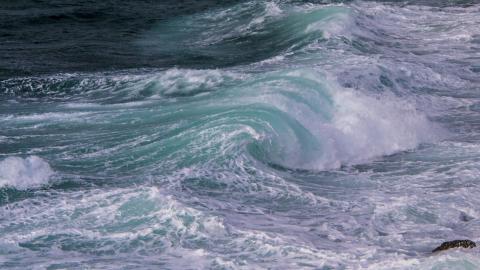 Summary
Learn here what the three ingredients are for developing wind waves.

In the end, you will be able to forecast the resulting wave height…

For generating wind waves, we obviously need the wind to blow over a water surface. The wind will then transfer a small part of the energy to the water due to friction between the two fluids – the water and the air – and due to an excess in pressure on the windward side of waves compared to the pressure on the leeward side.
The energy will then move as a wave along the surface of the water, but the water it self will almost not move. Inside the waves the water moves in a circular motion forward and backwards, up and down. There is thus almost no forward movement inside the wave but it’s only the wave energy that moves.
The stronger the winds blow the more energy will be transferred and the higher waves can be developed. But wind can’t stand alone.

A strong wind gust will only form ripples on the water surface. On the contrary, a strong breeze (22-27 knots) blowing over a sea surface for many hours will generate waves of up to about 3m. The duration of a certain wind strength is thus just as important than the strength itself.
But wind and duration can also not stand alone – we need a third ingredient.

If a strong breeze blows in two days from land towards sea, you still have very low waves near the shore. This is due to the small wind fetch (the distance traveled by the wind across open water). For waves to rise, the fetch over water must be relative long. The longer the fetch the less limiting will the fetch be to the height of fully developed waves.

If the fetch is long enough, e.g. over an ocean, the wave height will reach an equilibrium after a while and will not rise any higher. Now a steady state situation has been reached where the energy gain from the wind is equal to the energy loss due to wave breaking, forming white foam and friction. When the winds begin to decrease again, the wave height will begin to fall accordingly. However, the wind waves will then continue as swell – but this is another topic that you can read more about in this article: Swell vs. wind waves - what's the difference?

With above three ingredients in mind, it’s now possible to forecast the resulting wave height with below nomogram. Let’s learn how to use it by an example:
If the mean wind has a speed of 10 m/s (a fresh breeze) and a duration of 12 hours, you must follow along the line with the red arrow until you reach the vertical 12 hour-line (encircled with a red circle). Now you must follow a horizontal line towards left and read the height of the resulting waves.
In this example, you get 2.0 m (encircled with a blue circle). However, this will only be a good estimate if the fetch is at least 150 km (encircled with a green circle). If the fetch is limited to 100 km, the wave height will only rise to 1.8 m.
After around 36 hours, the waves will be fully developed at about 2.3 m and will thus not rise any longer even if the wind duration would be a week.
By the way – you can also read that the resulting wave period will be about 5.5 seconds after the 12 hours and increasing to about 6.3 seconds for the fully developed waves. The wave periods are the dotted lines in the nomogram.

We hope that you now have an understanding of how wind waves form. Always remember all three ingredients – wind speed, duration and fetch.
If you think Dorrestein’s nomogram is a bit complicated to use, then just relax – that’s why we have the wave forecasting models. The models are very good at keeping track on the speed, duration and fetch for you.