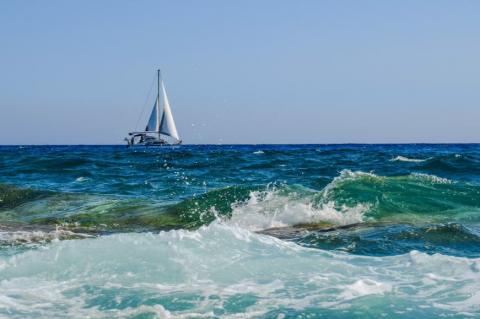 Summary
This article describes the background of the famous wind scale.

The Beaufort wind scale was formulated in 1805 by hydrographer and later Rear Admiral Sir Francis Beaufort and it was a stroke of genius.
The wind scale was not a revolution as such, but more an evolution, as Beaufort was standing on the shoulders of other giants, namely Defoe, Dalrymple and Dampier, who also had tried to quantify winds in scales.
Beaufort also discussed this with Robert Fitzroy, that later founded the world first Met. Office, the British. So, it wasn’t a revolution, more an evolution.

Up until the Beaufort scale was implemented in the Royal Navy in the late 1830’s, estimation of winds was very subjective and there was no unified naming of the strength of winds.
The cup anemometer to measure winds had been invented, but there were issues with accuracy. Furthermore, the genius part of the Beaufort scale was that it quantified wind forces relative to their effects on sails on a frigate, so there was no need for a precise measurement of the wind speed. The experienced naval officer could from the effect of the winds act accordingly.
Beaufort therefore added descriptions of the winds effect to his original scale, from “just sufficient to give steerage way” to the famous wording to the effect of the strongest winds: “that which no canvas could withstand”.
The revised scale also included description of sail settings at different wind scale. For example, wind force 6 would require: “Single reefed topsails and top-gallant sails”.
This reveals a slight disadvantage of the Beaufort scale. It was designed for frigates, so when sailing with any other vessel type, the effects of winds would be different.

If you didn’t read the headline, the scale we are talking about is the Beaufort wind scale and most likely everyone that call themselves captain are very familiar to this scale, as it is still very much used at sea. Might be of tradition but might also because it describes both the sea state at the same time as the wind.

Let us walk through the different stages, starting with 0 – called calm where the water is described by “sea like a mirror”, it goes without saying the wind waves at this stage is 0.0m in height.
When the wind goes from 1 to 3 Beaufort (Bf), light air, light breeze and gentle breeze, the sea goes from ripples to more well-defined wavelets, still the wave height at the highest is now up to 1m.
First when the wind become a moderate breeze, 4Bf, does waves appear, they are small and keep 1-1.5m in height.
At 5Bf, fresh breeze, does the waves become moderate with a height of 1.5-2.5m, “white horses are formed” and there is a risk of sea spray.
One step up is the waves large and sea spray is likely, we are now at the strong breeze, 6Bf, and 2.5-3.5m in wind waves.
The intensity increases when we reach the near gale force, 7Bf. Waves are breaking as they now have a height of 3.5-5m. White foam now begins to be blown in streaks along the direction of the wind.
At gale force, 8Bf, the wave height are now becoming moderately high, 5-6.5m, and at strong gale, 9Bf, the height rises to 6.5-8m. The wave crests of the high waves now begin to tumble and roll over while dense streaks of foam will be blown over the waves. Sea spray may reduce the visibility as well.
Storm force, 10Bf, means very high waves of 8-10m and large patches of foam from the breaking wave crests cause the sea to have a white look.
At 11Bf, violent storm, the waves are exceptionally high, 10-13m, and the sea will be completely covered with white patches of foam.
The Beaufort wind force scale ends at hurricane force, 12Bf, with phenomenal high waves of above 14m! The air will be filled with foam and spray and the sea will be completely white.

Photos of the sea states for all 13 levels can be found here.

For your convenience, the 13 levels are structured in this simple table.