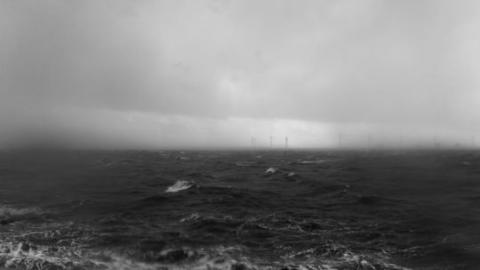 Summary
The visibility at sea depends on a lot of factors.

Factors like humidity, wind speed and temperature, and is one of the hardest meteorological parameters to forecast. This article will go through the most common weather conditions that could reduce the visibility at sea.
Visibility reducing phenomena like smoke from forest fires, dust from sandstorms and blowing snow can sometimes affect large areas over land but are very seldom causing difficulties at sea and are therefore not discussed.

What is causing reduced visibility

Mist is often defined as a visibility between 1000 and 5000m, and fog as a visibility below 1000m. The air is always containing some amount of water – either as invisible steam, as liquid water droplets or as solid water - like ice crystals, snow and hail.
The humidity is depending on the type of air mass, as warm air can contain more water than a cold air mass. It will also depend on the track of the airmass. An airmass that have moved a longer distance over water will be more humid, than an airmass (with the same temperature) that have passed mainly over land. If the air is cooled down, the water vapor will condensate into water droplets resulting in mist or fog. This is the same process as in cloud formation, where air is rising and therefore cooled down until saturation is reached. The water vapor will then condensate into water droplets.

Over land, fog will typically form during the night when the temperature is falling, and then dissipate during the morning as the sun will heat and therefore dry out the lower atmosphere. This, so-called radiation fog, can only form if the sky is clear and winds are weak.

The same process is not possible over sea, as the sea temperature have no diurnal variation due to the much higher heat capacity (compared to a landmass) of water. However, the radiation fog can later on move out to sea and can cause poor visibility for offshore sites throughout the day.
The radiation fog will typically be rather shallow, and often cover smaller areas and also occur partly as patches of fog. Two nearby sites could therefore experience a huge difference in visibility with one having more than 20km while the other having less than 1000m.

Fog can also develop when relatively warm and humid air is moving out over cold water (or land). This is called advection fog and will typically cover a larger area than radiation fog.
It is most common during spring and early summer, when the water still is relatively cold. In northern Europe, the advection fog will mainly be associated with wind directions between south and west.
If working offshore, the best way to evaluate the risk of advection fog, is to look at the sea temperature at your location and compare it to the dew point temperature in the airmass approaching your location. If the dew point temperature is close to the observed sea temperature, there is an increased risk of poor visibility.

Strong winds will often prevent the formation of fog, but misty conditions could still be present. This is due to the turbulence that the wind will create, causing less concentration of water droplets near the surface. If the wind is increasing after the formation of fog, the fog can lift and become low clouds with improved visibility near the surface.

When the air contains a large number of dry particles, as dust or smoke, it can reduce the visibility significantly. This is called haze and can both have natural and manmade sources. In Northern Europe, visibility will rarely be less than 5km in connection with haze.

Rain rarely reduce the visibility more than down to a couple of kilometers (typically 4-8km in moderate rain). Compared to a foggy situation, there will be fewer water droplets in the air, and hence less reflection of the light.  However, drizzle (defined as precipitation with much smaller water droplets than rain) is often accompanied by mist and will typically cause a visibility down to 1-5km. In connection with heavy showers/thunderstorms, the visibility could briefly drop to less than 1000m.

As snow crystals reflect the light more than rain droplets, visibility can easily be reduced to less than 1000m in connection with snow.
For the waters near the British Isles, the North Sea and the southern part of the Baltic Sea, it is rather unusual with snow in connection with fronts from west and southwest. The temperature in airmasses from west and southwest is typically only just below the required temperature for the snow to survive down to the surface. The (often) relatively warm waters will cause a warmer layer near the surface that will melt the falling snow. In some special cases, if you for example are working as a technician on a wind turbine, you could experience rain down at the foundation and wet snow at the height of the nacelle/blades.

Cold artic winds from the north or east can produce long periods with snow showers over offshore locations. As the cold air is moving out over warmer sea water, the convection (rising warm air) will generate showers that sometimes could be heavy. This phenomenon is often called the lake-effect, as it is most common over lakes, but do also occur over sea when not too far from a larger landmass. If the wind direction doesn’t change, you could experience heavy snow fall throughout the day with very poor visibility.

If a polar low should enter the North Sea from north, there is also a high risk of snow. As the air originates from the polar regions, the air temperature will be very cold. This means that the showers normally will be showers of snow, which will reduce the visibility significantly at the sea surface. This will also affect transportation by helicopter between land and an offshore wind farm.
If you want to learn more about polar lows in the North Sea, you can read this article.