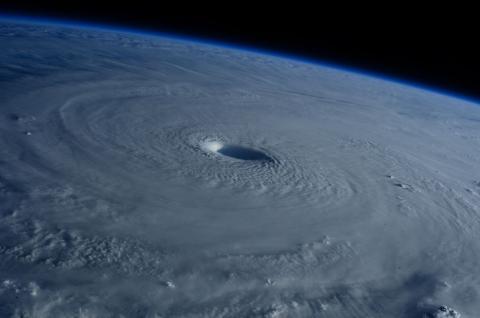 Summary
The most devastating type of low-pressure systems are tropical cyclones.

They are also called hurricanes (USA) or typhoons (Asia) depending on geography and in fact they are the exact same violent phenomenon that we generally call tropical cyclones or TCs.
They have a size of typically 100-500km in diameter but sometimes up to 2000km and a lifetime of typical up to a week, but sometimes several weeks.
They bring different types of nasty conditions like torrential rain, flash floods, large hails, thunderstorms, risk of tornadoes, storm surges, steep and phenomenal high waves, an irregular wavefield and of course a lot of wind!
The strongest winds and highest waves are found in the eyewall of a TC and in the right semicircle (relative to its motion).
This article will describe how tropical cyclones form and other associated topics.

The important conditions for formation

There are a number of conditions that has to be fulfilled in order for a TC to form and develop. Below you find a list of the most important conditions.

Tropical cyclones form over warm water, and the water temperatures need to be at least 26°C down to minimum a 50-metre depth - although they may survive over colder waters once they have been formed. They derive their energy through the evaporation of water from the sea surface which will release evaporative heat, which then will create convection (rising air).

In general, the flow moving TCs must be fairly equal from the surface to the top of the troposphere. If winds aloft (let’s say in 5 to 10km height) blow much stronger and/or in another direction, a forming TC would be pushed apart. Therefore, only a weak vertical wind shear (less than 20 knots between the sea surface and the tropopause) is allowed if a TC should form.

TCs do not just form if the sea water is very warm, the winds aloft are weak and there is enough Coriolis force. TCs would then form all the time over the tropical seas. The airmass has to be instable in order for showers to form in the first place. A large group of heavy showers and thunderstorms in the tropics is called a tropical disturbance. This is the first phase for the formation of a TC. If the other conditions are fulfilled, a tropical disturbance may then begin to rotate due to the Coriolis effect.

Warm moist air at the surface and cold unstable air aloft allow deep convection while divergence aloft causes the pressure to drop at the surface.
Inflow at the surface and rotation combined with friction causes an inward spiral of air which means convergence of air. This can turn into a positive feedback loop:

The different phases and categories

Below are a short description of each phase of a fully developed tropical cyclone.

If all of above conditions are fulfilled, a tropical disturbance may begin to rotate due to the Coriolis effect.

When rotation has begun and the highest mean winds are above 20 knots, the cyclone is called a tropical depression.

When the highest mean winds are between 34 and 63 knots, the cyclone is called a tropical storm.

The season for tropical cyclones

In general, a TC mainly moves westwards or west-northwestwards with a speed of 5-15 knots and from around 20 degrees latitude veering to north and later east (in the southern hemisphere mainly turning southwards and later east). In the Arabian Sea and Bay of Bengal mainly a northerly track.
The track of a tropical cyclone is rather difficult to predict. Therefore, ensemble forecasts are valuable tools, in order to determine the most likely track.
Furthermore, as the wind gradient is very sharp, small deviations in the track will have a large impact on the individual forecast locations.
As TCs move slowly, it’s rather easy to avoid them when they move in the tropics - if you don’t get trapped between the cyclone and land.
Below are a few rules of thumb:

However, some tropical cyclones will move north of 30N and get caught in the westerlies and then transform into an extratropical low. This usually results in very uncertain forecasts, as the former tropical cyclone will introduce a disturbance in the synoptic situation that is hard to forecast correct.
This also means that the TC will accelerate - sometimes from 10 knots to 50 knots! In such a case, you’ll have to be very defensive when designing a shipping route…

If you want to read more about different types of cyclones you can read this article.