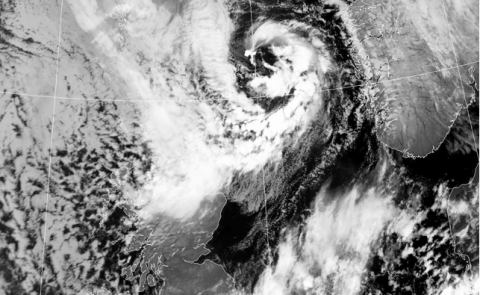 The formation of a Polar Low

During wintertime, small cyclones can form - typically 200 to 600km in diameter, but sometimes larger. Polar Lows are therefore much smaller than normal mid-latitude low-pressure systems which typical have a size of 1000-3000km.
They form over sea in subarctic areas without sea ice - north of the polar front. The largest cyclones are called Polar Lows – or sometimes Arctic Hurricanes. These strong storms are usually formed, when polar air is transported across maritime areas. The cold and dry air makes the bottom layer of the atmosphere unstable, when it flows over relatively warm sea, which then forms a low-pressure, due to rising air (convection). A Polar Low will thus decay rapidly, if it moves from warm sea to a cooler land surface.
It is challenging to make short-term forecasts of Polar Lows, because they occur very suddenly in areas with very few observations, but also due to the smaller size of the Polar Lows in relation to the grid of weather models. In the late seventies, the understanding of the formation of Polar Lows was greatly improved, because satellite observations became available.

Poor visibility and risk of lightning

If a Polar Low should enter the North Sea, it will be from the north - from the Norwegian Sea. The temperature aloft in the North Sea must be very cold and at the same time, the sea surface temperature must be somewhat warm. If the temperature difference between the sea surface and the air in a height of approx. 5km is about 50 degrees, spontaneous deep convection will occur. This means that showers will form spontaneously over sea and drift with the general flow. Sometimes the showers can become very heavy and develop into a thunderstorm and generate lightning.
As the air originates from the polar regions, the air temperature will be very cold. This means that the showers normally will be showers of snow, which will reduce the visibility significantly at the sea surface. This will also affect transportation by helicopter between land and an offshore wind farm.

A Polar Low can generate strong winds of gale force, but sometimes also up to storm force. As a Polar Low is small compared to the normal mid-latitude lows, the area with strong winds is relative small, but still intense if it passes an offshore wind farm. Due to the relative small size of the low, the wind fetch over sea is also relative small. This means that the rising waves will not be fully developed but can still rise to 5m (significant wave height) or even higher.

Watch out for the Polar Lows – they are rare in the North Sea, but when they arrive, they can change the conditions very fast and in different ways: Poor visibility, lightning risk, strong winds and high waves.