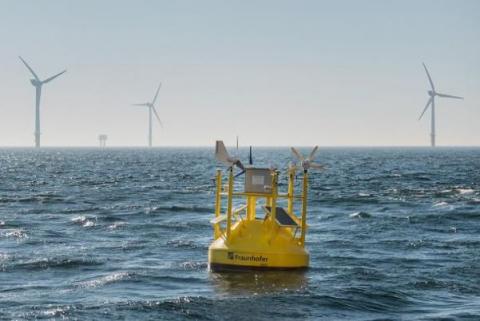 Summary
This is a short story of LiDAR observations offshore.

On why they are important and how they work.

An early morning before most people are awake, the site manager is already about to decide if the vessel should be filled with technicians and head out to the offshore site or not.
It is not one of the easy mornings, as the weather conditions is expected to be close to the wave criterion today. She checks the observations from site. The wave height seems to be just above the criterion, but the latest forecast says it will be just below the criterion all day. What now?
The wave is above the criterion even that the forecast says it is not - why is this and how should I think now? She decides to call a metocean meteorologist and ask them what’s going on. Luckily, this time the waves are just falling a little slower than predicted and will most likely be below the criterion within an hour or two. The site manager can then happily fill the vessels with technicians and get the work done.

This is an example of how observations can be used to make sure you get the most out of your workday. If no observation existed it would be impossible to tell if a forecast is correct or not, which is important as forecasts aren’t perfect.

How does one observe the weather? Well, that’s a broad question.
The equipment that is used to collect the observations are very different from each other. Traditionally, the wind speed is measured with a cup anemometer. The more modern, innovative, and appointed to the future measuring equipment for the offshore industry, is a LiDAR (Light Detection And Ranging).
Over the last couple of years, as the offshore wind industry has grown, the LiDARs have begun to take the role as the go-to measurement device. The reason for this is the offshore part - as LiDARs can be fixed on floating constructions, such as buoys, while met masts, where cup anemometers are mounted, cannot with present technology.
With this knowledge, it goes without saying, that it will take much longer time to install a fixed met mast at an offshore location than a floating LiDAR. It will also be easier to deploy without a long and complex approval procedure and is also much more flexible. The whole process for beginning a measuring campaign for a potential wind farm project is therefore much faster and easier.
It is also much cheaper as it does not need a foundation to stand on and the installation do not need an offshore jack-up installation vessel. Additionally, competition on the LiDAR market has also helped in lowering the price for the device itself.

How a LiDAR works

The LiDAR works by shooting a laser light beam, that will “bounce” on aerosols. The reflected laser light beam is then detected again by the LiDAR. Light is a wave, and the “light-wave” will have a frequency - and by applying the Doppler effect, the speed of the aerosols can be calculated. The aerosols travel along with the wind, so thereby the wind speed can be measured.

This sounds too easy - it must have a snag!
The snag in this case is two conditions. So far IEC standards request met masts, as LiDARs not yet are a fully recognized technology. The fact that they are mounted to a buoy is the other problem. This means that the measurement will move with the waves (this time not a light wave, but the traditional and visible ocean wave). This forces a translational and a rotational movement of the buoy and thereby the LiDAR.
The wind speed and wind directional measurements can be affected by this. However, the LiDAR can measure very rapidly - many times per second.
That together with the knowledge that the period of waves is relatively very long compared to the frequency of the LiDAR beam, it is argued that the wave motions are averaged out for the wind observations. More importantly, studies are showing that the accuracy of LiDAR measurements is at least equally accurate to the traditional cup anemometer.

The flexibility of the LiDAR has been a heavy argument for why it was chosen, but this is not only about the possibility to mount them on a buoy. It is also that a LiDAR at once can measure the wind at several different altitudes. So instead of installing several cup anemometers on a met mast, you have several measurements in one by installing a LiDAR.
This also makes measuring at the wind turbine hub height (as preferred) much easier. However, the uncertainties of the observations may for various reasons increase with altitude. This problem can partly be worked around as there is an approximate relationship between the wind at lower and higher altitude, so the reliability of the observation at the higher altitude can be confirmed.
Another win-win advantage -  the buoy has the possibility to also hold wave state sensors installed (and others), so all required metocean observations can be measured with only one instrument and at the exact same location. What’s not to like!