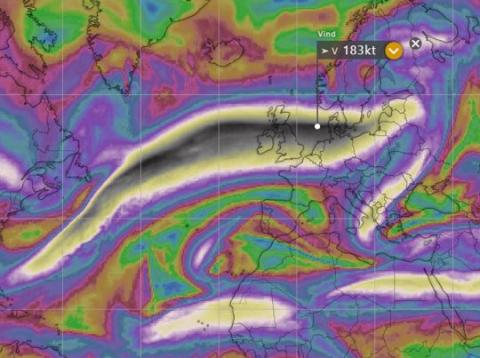 Summary
Does the jet stream affect the weather at sea? Yes!

The jet stream is a strong wind at a height of 5-15 kilometers - a jet is Latin for “to throw”.
It can be 200-500 km wide and a few kilometers high with wind speeds of up to more than 200 knots.
The jet streams are of great importance for the weather conditions at the sea surface.

What causes the jet stream?

In general, the jet stream is just above and parallel to the boundary between two air masses of different temperature. The jet stream blows around the Earth in a varying wave motion, which is shaped by the location of the cold and hot air masses, high pressure and low pressure, as well as the distribution of land masses on the globe.

There are two prominent jet streams in the Northern Hemisphere. The Subtropical Jet Stream, which in the summer is located at about 40° N and in winter at about 30° N in approx. 12-16 km's height, and the Polar Jet stream, which normally lies between 50° N and 70°N at approx. 7-10 km's height.
There are also two prominent jet streams in the southern hemisphere.
In Northern Europe, the jet stream acts as a conveyor belt bringing low pressure systems. It is also the one that helps to ensure that we have a mild climate as it brings in the warm air that is heated by the Gulf Stream over us from the Atlantic.

The jet stream occurs in the area with the largest temperature gradient. Generally, a powerful weather front has a jet stream just above and parallel to it. The jet stream lies between the top of the front and the tropopause.

The wind speed in the jet stream is greatest in the center of the wind belt and decreases out of. It is described as a river of wind because the atmosphere behaves like a fluid medium. A strong temperature gradient gives a sharp increase in the horizontal wind speed with altitude.
The temperature gradient is influenced by the season. The seasons help determine the strength and position of the jet streams. The polar jet stream moves south in the winter as it gets much colder at the poles. It is said that the jet streams "follow" the sun, as the seasonal and daily warming of the atmosphere affects the jet stream.

Global warming will affect jet streams. The fluctuation of the polar jet stream becomes larger as the dwindling sea ice provides ample opportunity for temperature exchange between air and sea and thus somewhat small temperature differences in the air.
Jet fluctuations can be so great that winds over a larger area end up blowing north-south or south-north instead of west-east. Relative warm air will be transported north and relative cold air towards south, resulting in either colder or warmer winters locally in Northern Europe.

How does the jet stream affect the weather at sea?

The jet stream helps guiding the low-pressure systems at the surface and is therefore a part of the track of the lows. During the autumn, the polar air mass becomes larger in the polar region and pushes the polar front and thus the Polar Jet stream towards more southerly latitudes. This mean that the track of lows becomes more southerly (on the Northern Hemisphere) as well.

The jet stream is also affecting the development of low pressure systems.
If the jet stream is very strong and a jet streak develops (an area where the wind speed in the jet stream culminates), it can further enhance the low development if the jet streak is positioned in the right place regarding to the initial surface low pressure.
The right spot is either if it’s the left exit area or the right entrance area of the jet streak that will slowly move over the surface low.
This can often generate a rapidly developing low also called a meteorological bomb and will often culminate as a storm or hurricane force low that will rise phenomenal high waves over sea. If you want to read more about met. bombs, ten go ahead here.