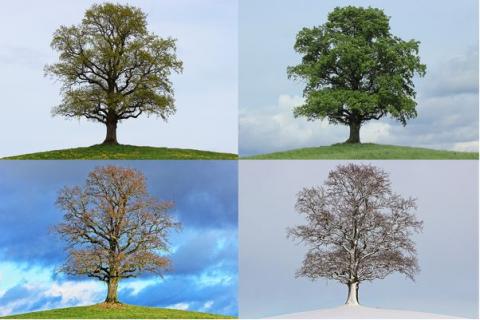 Summary
When a meteorologist is predicting high-pressure conditions during summer,

you often can expect sunny weather and weak winds. During the winter, the same high pressure could cause a whole day with cloudy and misty conditions. This may sound confusing, but by understanding the role of different air masses and seasonal variations you can better understand the uncertainties in the forecasts.

As the axis of the Earth’s rotation is tilted with 23.5 degrees relative to its orbit around the Sun, there will be seasonal changes during the year as the Earth is moving around the Sun.
During the summer, the Northern Hemisphere will tilt towards the Sun resulting in more direct sun radiation and higher temperatures.
During the winter, the Northern Hemisphere is tilting away from the Sun with less direct sun radiation as a result and the temperature will therefore be lowers.
The warmest and coldest temperatures will be observed somewhat later than the Sun’s maximum and minimum due to the cumulative effect of the Sun's heating of the Earth's atmosphere and especially the heating of the seas and oceans.

The tilt of the Earth, and hence the amount of radiation from the Sun, will also affect the local weather. When a high pressure is located over an area, it will result in weak winds and often dry conditions. However, depending on the type of air mass, moisture may be trapped near the surface during the night due to a stable vertical temperature profile and no significant mixing with layers above. This can often cause mist/fog and low stratus clouds.
During the summer, the fog/mist/low clouds will typically disappear during the morning (some hours after sunrise). In the winter, the weaker sun radiation will have a struggle drying out the lower part of the atmosphere. The weather models often perform poorly in these situations. You may therefore sometimes experience a whole day with clouds, although the local forecast was predicting a sunny day.

The difference in temperature between land and sea also plays an important role for the local weather due to the heat capacity of seawater. Showers are more common over land during the summer, while the opposite is true for the (early) winter when the water is relatively warm. The presence of fog will also differ between land and sea depending on the season.

The polar jet, which is the borderline between the cold polar air to the north and the warm tropical air to the south, will be strongest during the winter when the temperature difference is greatest. This is the reason why most windstorms are observed during autumn and winter.

Another important ingredient for the local weather, is the type of air mass. The two main categories are maritime air and continental air.

A maritime air mass is forming when air has been moving a long distance over seawater and will therefore pick up moisture. The amount of moisture depends on the temperature of the air mass, as warm air can contain more moisture than cold air.
If relative warm maritime air is passing over a colder surface, like a landmass during the winter, it often results in misty conditions and risk of fog due to condensation of a part of the water vapor.
In Northern Europe, this will often happen in a S- or SW-ly flow.
In the summer, the same air mass and wind direction can cause severe thunderstorms, due to the potential high temperatures and humidity. The days with most lightning strikes, are often in those situations.
n a N- or NW-ly flow, the air mass is often too cold for fog or mist and is more often associated with scattered cumulus clouds and sometimes isolated showers.

A continental air mass is forming when air has been moving a long distance over land and will then be drier than a maritime air mass.
In Northern Europe, the driest air will typically be when the flow is from northeast or east, as this air mass often is cold and will therefore contain the least moisture. A dry and cold air mass often means sunny weather with only a few clouds.
The coldest temperatures during winter will occur with this air mass, but then there will be a risk of showers if the air is passing over open (and relatively warm) water. This phenomenon is often seen in the Baltic Sea during winter and can form a lot of showers of snow if the air mass is cold enough.
During the summer you will typically get the highest temperatures in warm continental air from S- or SE. A continental air mass is therefore responsible for both the lowest and the highest temperatures compared to a maritime air mass.

To recap, above we quickly went through the reason for the different seasons and some of the weather related to summer and winter – like sunny conditions vs. misty conditions.
We also went through some of the most frequent weather types related to a maritime air mass and to a continental air mass and learned that the most severe thunderstorms occur in moist and warm air but also that showers (of snow) can form over sea during the wintertime.