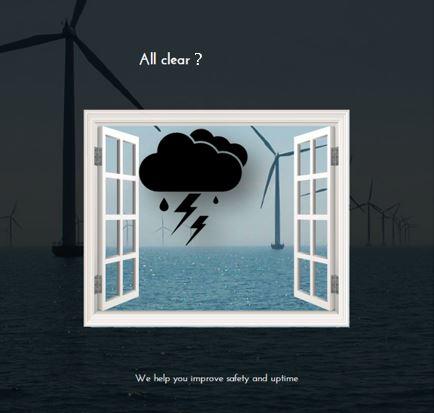 Summary
On how to improve uptime in offshore operations

It is common knowledge, that weather forecasts can be uncertain, and that this uncertainty in general will increase with time. A forecast can also perform poorly for a given location and with certain weather conditions (for example due to challenging topography).
Furthermore, in some weather situations certain meteorological parameters can be below your working limits while other parameters may be unfavorable - for example a weak southerly flow of moist and warm air often means weak winds and low wave height but can also mean high risk of thunderstorms.
This article is aiming for an increase in the understanding of these difficulties, and how to optimize the duration and number of weather windows. In part 1 we focused on winds and waves where this part will focus on work interrupting thunderstorms.

The diurnal variation of thunderstorms

During summer, the peak season for thunderstorms, the showers/thunderstorms will typically form around noon and then culminate during late afternoon. However, this is only true for land areas and areas close to the coast if the wind direction is offshore. If you want to read more about the different season for lightning, then just click here.
For offshore wind farms located far from the coast or with the closest coast to the east, this diurnal variation will be less distinct, as the showers/thunderstorms typically will be weakening over the colder sea surface.
This diurnal variation can be seen in the graphs below (figure 1 and 2), showing the distribution of lightning alerts issued by Vento Maritime during the day (06-18 LT). The data is for wind farms in the Baltic Sea, south of the island Lolland and in the Danish water Kattegat and is representative for many offshore wind farms in Northern Europe.

As seen in the figures 4 and 5, the diurnal variation becomes less distinct during the winter.
For a wind farm in the Danish part of the North Sea, figure 3 and 6, there is no clear diurnal variation and no significant difference in the winter months.

The direction of thunderstorms

Rules of thumb for thunderstorms

Based on the above graphs and diagrams, there are some basic rules for Northern Europe, that can help you plan the day and maximize the working hours:

- In the summer, when thunderstorms are most frequent, the thunderstorm activity will often be concentrated around the afternoon.

- If your location is relatively close to the shore, and the wind is directly offshore, there is an increased risk of thunderstorms. This is especially true during the summer but may also be the case during the autumn and spring.

- During easterly winds, there will rarely be heavy showers/thunderstorms.

- If any significant topography is near the site, you will seldom experience thunderstorms with a wind direction from these mountains as the air typically will be too dry for thunderstorm formation.

- With a flow from between south and southwest, and with forecasted showers over your site, there is an increased risk of thunderstorms.

If you like even more rules of thumbs regarding thunderstorms, we have written this short article on how to differentiate between thunderstorm clouds and regular stratocumulus clouds.

Lastly, it is also important to understand the synoptic situation. Are the conditions generally stable (the air temperature is rising with height) or unstable (air temperature is falling with height)?
A warm air mass behind a warm front, typically means no or low risk of lightning, while a cold air mass typically means showers and an increased risk of thunderstorms.
High pressure weather will always reduce the risk of thunderstorms significantly, while low pressure/front passages in some cases could trigger thunderstorms.

If you want to read more about how, when and where thunderstorms form, you are very welcome to read this guide.